It has not been a particularly productive week but I have been busy---mostly with things on the home front, I guess.   It seems like one of those weeks were you look back and you have to ask yourself "where did I go when I don't have much to show for it?"

I have not sewn a lick all week-- I did a little embroidery on the Halloween row but really nothing to show there.  I know a bit more of one of the witches is done but you could barely tell.  I've knit a good bit---maybe added 3 more hats to the box that I will be sending on to Cindy.  I am sort of saving some of that for next week though as I have a good bit of wait time ahead---same day surgery and no one can really tell me where I am in the order---1st or 6th or somewhere in the middle.   Hospital are so helpful (not!)

Tuesday was Bama Belles day.   I do have pictures to share with you in a moment.

Wednesday my preop doctor visit, get the preparatory meds and go for the preop lab and history taking.

Yesterday paperwork and closet rearranging to make room for some yarn that followed me home from Belles, thanks to a generous donation from one of the gals who came to visit us.  Cindy said she was covered up with yarn right now and I WAS able to make some room.   I also had to go BACK into the eye docs office to pick up some sample meds.  We found out the one med was generic and cost 30 bucks--the other two were not and cost $105 and $155 respectively.   Are you kidding me??  I figured I had to pony up the bucks as I have to have it to prep for the cataract extractions.  Didn't sound there was a substitute for it either.    (They were out the day I was in the office, I guess)  DJ had a cow, called the office about the samples and made Wal-mart take the meds back that I had picked up as they were still sealed, unopened.    While I was out and nearer the meeting place, I took the bulky boxed up batting that we will be needing soon.  Seems to me that there are lifting and bending restrictions after the surgery?  Trying to remember what DJ was cautioned to do when he had his done.

The laundry is all done, turkey is cooking in the crockpot, the rest of the paperwork pushing is done and now I can play.  The car is packed for guild tomorrow.  As luck would have it, the sewing machine repair guy will be at the meeting to clean/pick up machines.  He works on sergers and mechanical machines----my old Singer needs some attention so we'll see what he has to say.  The guy lives about 20 some miles north of me for pick up later---whether it can be fixed or not.  Funny thing is that it runs if you hit the pedal with yoru hand or foot but put something under the feed dogs, no go.

Back to Belles---considering that we are right in the heart of cold and flu season it was amazing that so many of us were there. We are right back in the swing of things now that the holidays are passed----7 quilts pinned, I think??  (Hence the need for the batting I have had in storage in our shed, LOL)  We also had two visitors and one of our friends who used to attend the group but we all still know her from another guild.  Ada laughed and said she might have to re-introduce herself when she introduced us to Donna, her guest.  Nancy M was able to come this time too after contacting me a couple months back about the group info.

Nancy met Bev, Teresa and me online in a Facebook quilting group though they are far more active there than I am.  But she had been cleaning out her sewing room a bit and brought some things that she thought we might be able to use.  There was a bowtie quilt top someone gave her that might work up into two kids quilts if I get out the seam ripper.  Some fleece fabric that would make a nice tied throw.  A little bit of cotton yardage along with some materials that she thought Teresa could use for some crazy quilt things she has going on.  And yarn---as she knew I had been knitting those hats along with a sock loom and circular knitting loom in various sizes.  Some books for our little quilt library cart and a few smaller items that were distributed for use.  So sweet of her to do that but Nancy said she would rather give that stuff away to people that will use it rather than take it somewhere and it gets tossed.   I think we sent her home with just a few odds and ends and the container which she said normally holds her Christmas decorations.  THX again, Nancy!

Several of the girls had machines fired up.  Rosa needed help getting some backing together.  Donna needed to cut borders for her first quilt.  Nancy had some heart blocks she was sewing to interfacing, grid work similar to how watercolor quilts could be done.  Bev and Teresa were exploring some silk ribbon embroidery and such.  Marilyn had her machine out too but I am not sure what she was sewing on---mostly because she was helping to pin and such.    Me?  Pinning and helping the others out a bit.  I didn't even touch my embroidery other than to drag it out of the tote bag.  Next thing I knew it was time to go home, LOL.

Bev had to take pictures for me again(!)  I had remembered the camera but did not check the battery status as it had been working just fine at home.  Lois had 4 to turn in.  Two look a lot alike but the border fabrics are switched out.  I do not know the names or pattern source.  I asked but Lois just replied that it was out of a magazine.  I told her I might be labeling them all "out of a magazine 1, 2, 3 and 4 " on my quilt document, LOL.  I should tell you that the pretty chaining star below has 4 patch posie centers in the stars.  Really lovely quilt!   The other one is just a fun sporty themed one--good for boy, perhaps? 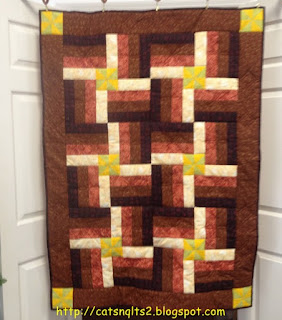 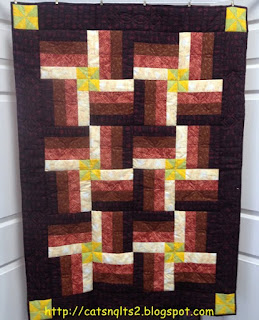 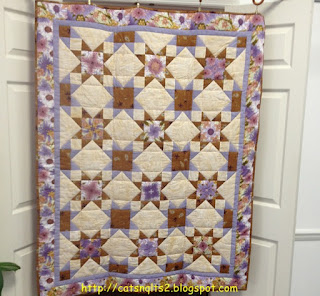 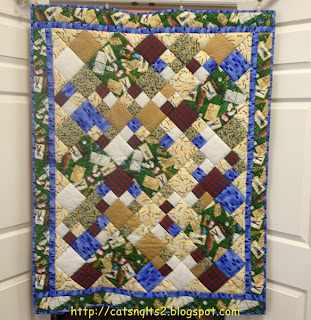 So I guess I'll see what Friendship Quilter's will have in store for us tomorrow.  Raffle table, pay the dues and fill out membership forms, take the machine, take the row quilt section, deliver a few other items, take my stuff to take notes as I am still the secretary, etc.  There was a executive board meeting today but one of the girls emailed me to tell me she would be happy to take notes so I would not have to make an extra trip.  Good thing too as I had a little tiff with DJ about quilt groups and my being gone "so much"".  The blow by blow does not bear repeating but I don't know why my being away for only 3 days out of the month for 5-6 hrs bothers him so much.  It could be far worse as I could be gone almost every day of the week, some weeks if I went to every group I am invited to.  Trust me, I need this time away from the house---and my girlfriends!  Men can be such small boys sometimes, no matter how old they are!!