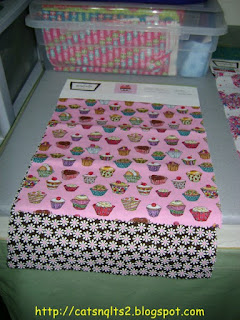 Yesterday was Friendship Quilters Guild meeting--2nd Saturday of each month over in Pell City (AL) starting off the 2013 program year.  As it turned out Jane and I were the only ones that went as others either had plans or were not feeling up to the trip.   The group had gotten an email that the sewing machine guy would be coming.  If  anyone had a mechanical machine or serger that needed cleaning or repair, he would pick it up.  My older model Singer needed some attention after my last use, trying to use the cams.  He agreed that it was probably something the feed dogs, some gear or belt or some such thing and expect a call in a week or so.

We also had the fund raising raffle table set up.  It was also time to complete the membership information sheets and pay our dues.   I had various things to hand off to some of the gals at the meeting.  People to make connections with, chat with.   A lot going on!

You might be wondering what is with the Michael Miller fabric samplers I am showing you.  Well, when we had our retreat this fall the girls had contacted various fabric companies and suppliers for promotional materials and anything they wished to contribute.  We had some great swag bags!!  This arrived AFTER the retreat but the organizers didn't want this to go to waste.  Jackie W set up bags with a fabric grouping and it will become a challenge project instead.  You were to reach in the larger bag but were not allowed to dip in there again if you were not crazy about what you drew.   I loved mine though!!   Cupcakes and daisies on a chocolate brown background. 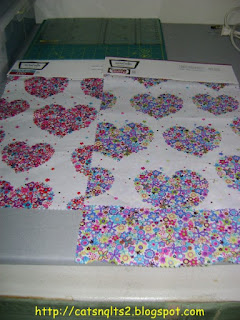 There was one last bag left and break time was over.  Jackie couldn't get the group's attention to say there was one more available.  I told Jackie I would take the last one and see if one of the absent Belles would want to participate.  If not, I will do two of them.

The rules are simple----just make something, anything but you have to use a bit of however many fabrics are in the little packet, adding as much of your own fabrics as you wish.  The object should be done by the April meeting.   They have something else in mind for the later part of the year.  I know a good portion of the group was hopeful we would do another paint chip challenge.

(For the pieces on the right--there was only one piece of fabric in one packet so they put the "berry" toned one in with the other "cocoa" toned piece. )

We got the meeting done at least 30 minutes earlier than usual and did not stop for lunch before heading home.  I walked back in the house a few mins after 12!  I had some grocery errands to run and a few things to tend to once home. 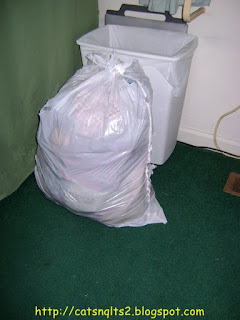 Jane had received a bunch of bags of fabric from one of the gals in the Piecemaker group that meets on Thursday evenings.  Rita had mentioned that she might have some stuff for Bama Belles when I saw her at the Gadsden Quilt show set-up or take-down but more or less, forgot about it.  When Jane arrived and we were working out who was going to drive,  she was prepared to empty out her trunk into mine.  Six bags about this size!!!  I only had DJ bring in one of them to start with when I got home.

Before I turned in for the night I sorted through the bags.  I may be issuing a challenge of my own for Belles by mid year, LOL but not telling them just what yet.  There are still some "Tons of Black" challenges in the works, after all!  Some things we can use, some things I can use at home for various project, pro bono and otherwise.   Some will be donated elsewhere and a few odd things were tossed.  A couple of the gals work with flannel making rag quilts so I set that aside for them.   I thank Rita for thinking of us!  As far as me hauling it in from the car, I may need some help with that, due to the eye surgery activity limitation.

I caught up with my friend Norma sometime yesterday afternoon chatting as we often do on Windows Messenger.  It started off innocently enough with a simple question. "What was your program about today?" No blame can be assigned for leading the other astray---just one of those offhand comments.  Oh I could say it was Jackie C and the program committee but why?  LOL

It went something like this---edited a bit.  You can read her version of this story on her new blog location:
http://silverthimble.ca/blog/2013/01/stackn-whack/

Norma says
What was your program today?

AND you can almost tell where this is headed, right???

Norma says
i have enough blocks to make myself one
mom had it on her table today
i saw it in the camera  (they were using Skype)..............I forgot about it till I saw it today
Linda J says
well then maybe I need to challenge YOU to finish yours next month too
Norma says
lol
maybe

And really that is how we get ourselves off track,  so to speak.  If I were to decide to do one later, a couple of the Belles have the pattern and ruler and would let me borrow it.  I'll quote Norma here as she put it rather well

"And so it always starts–from a small spark in a conversation.  Before we know it, we have plans for the next project.  We keep each other motivated and on track to completion.  We are also responsible for creating a few new UFO’s along the way.  But given that UFO’s are a part of this creative process, this should not be a surprise.  We both have way more ideas about what quilts we want to make than we have time to finish them."


We were telling our FAB friend Cher about this today---and even she said she has a stack 'n whack somewhere in her home.  We may have roped her in as well as soon as some of her current projects are completed.

Norma posted pictures of her experiences with stack 'n whack and I told her that I would do the same, by way of showing her what I have to work with.  Her parting comment to me on our saying "good night, see you tomorrow" was that we would be "dreaming about UFO's".  I replied THAT idea was more like a nightmare, LOL.  Maybe it was more like haunting my sleep but she knew what I meant.

So more pictures----I have 24 blocks so apparently I hoped to enlarge it from the book that called for 18 or 32 if you want it huge.  I marked my book 25 though for some reason as it is arranged in row groupings of 4 and then 3 ending with 4.  Do I make another block???  Do I have enough fabric to do so??  Or enough background on hand---I think so.  BOY oh boy did my notes get cold!  I can't even remember how I cut the 60 degree triangles out--surely not how she shows in my ancient book! 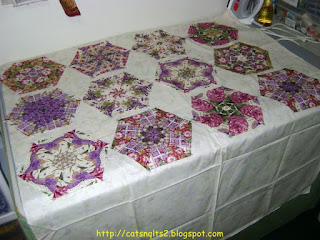 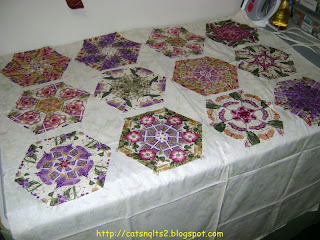 I believe that this is a circa 2002 or 3 project.  Several of us Belles took a class at Heart to Heart in Trussville.  3 people I know for sure----Betsy B, Joy, Mary Frances, me but perhaps one or two more.  Betsy used the same main fabric that I did but her background and contrast colors were different.   Mary Frances follows my blog so I imagine she might have some insight into this.  More importantly, did she finish HER version???  Anyone else out there in the same boat we are in???

Norma and I were bandying out about dates to possibly sew and encourage each other as that really works well for us both.   I don't know that we came to a firm decision on that score but it WILL happen.  I can't find my 60 degree ruler and in fact, ordered one so that will cause a little lag time on my end.  I know I had one at one time!  She has some projects that need moved along first as do I.  Tree Skirts, anyone?

It is doubtful that any sewing will get done before Tuesday and my first eye surgery.  It also remains to be seen if this is any deterrent to my sewing.  I know that there is no bending, lifting, stay away from steam, etc and tons of eye drops.  Guess I wait and find out!  Plenty of knitting at the ready to get through the hospital waiting and doctors follow up.