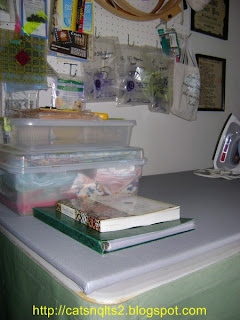 Well, my Farmers Wife Inspired Sampler (FWIS) is still waiting for me to get to cutting.   At this point I can just about say it is not going to happen today either.  It is mid- afternoon and I promised DJ I would make some pizza for supper, meaning I'll be measuring out flour and trying to get the water temp up to make dough in a hour or so.  Cutting and this project was at the top of the quilting "to-do" list.   I want to do it but there are always obstacles to that plan. Piles of quilting, QOVs, something else.

Yesterday turned out to be paperwork day.  Quilt show entries, balance the checking account.  Take care of something for one of the Belles.  Mailings to prepare.  Couple errands to run.  No sewing, in other words.   I kept busy clear up till 2030.  Made a good dinner too.

Today, I've been up since 6 so you would think I would have more done.  The laundry is done.  Some minor household tasks are done.  More should be done, LOL but I don't live to clean.  Work on a handout was hampered by the fact that I either totally forgot how to do an exploded diagram and/or draw and color in simple shapes.   OR EQ whatever version doesn't want to play nice with Word 97-2003.  Where's those manuals when you need them!?  I got it finished up but not quite like I originally envisioned.  Downloaded some patterns and found something that might work for some Western themed fabric from the donation bin.  The link HERE will take you to EE Schenck and the free pattern site---take a look at one of the last ones "Galaxy Bunkhouse Blanket".  ( It is a pdf so I don't want to link to it directly). 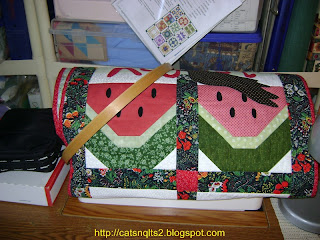 One of today's tasks was to bag up all my show entries in their own individually labeled pillowcases.  New twist this year, all the contact information along with the name of the quilt.   Whatever!  I am not going to write all that info on a pillow case that I might actually use.   Take that back---this one isn't bagged as I am finally going to quilt around those watermelon seeds since I found the black quilting thread and dredge up a bead for the crow's eye.   Put that on the list of quilting "to-do's".

Oh, and see that document hanging off the bookshelf in the sleeve protector?  That is the Friendship Guild BOM.  We are having a rather impromptu sit and
sew on Thursday, Friday and meeting day Saturday next week---6th, 7th and 8th.  The days are supposed to be devoted to UFOs and comfort quilts.  I could cut out the blocks for the BOM and use them for one of my pro bonos for guild.  Or not, LOL.  I kind of like the blocks but I have another BOM up on the sewing room shelf that could be used too---already kitted up.  Now that one is really a UFO too. 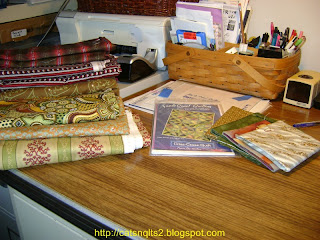 And then there is this-----I was looking for the Batting Buddy templates that had been at the meeting site.  (Linda C left the batting template and the 4 patch on point pattern "Chit Chat" when she moved)  A couple months back Bev had asked for some help in figuring out the "Criss Cross"  pattern using the Fun and Done! Quilting technique from Prairie Sky Quilting.  Take a look as they have whole bunch of patterns that use this technique.   I was busy at the time but I did intend to get back to it and possibly demo it.   The others would probably be interested in seeing it as well.  Brenda had the template set as they had done this at another area quilt guild but I don't know that she took the class.    That was fine!  That is why we have a library cart in the first place---to share stuff  we no longer want or need but she thought I needed it back right away. I didn't and tried to tell her to keep it as long as she needed to.  She insisted that she was not ready to start her project.

Now I really do need to try it before the next meeting, LOL---the 11th.   The fabric on the right---the 4 fat quarters were what I pulled from the birthday bag at Friendship Quilters.  I like them but not really my palette of colors.  Then there is the stack of fabric to the left.  Marilyn gave me large pieces to use possibly for backs but there is some smaller pieces that I think were some of Linda C's leftovers.  I also have some olive-y greens that would work with it and can dig in my stash for others that might go with this.  Maybe for a more masculine appearing quilt or a fall flavored one.  Or it could possibly be my "sit and sew" project---kill two birds with one stone??   I am leaning towards that idea once I review the fabric requirements for a lap or crib sized project.

And sew it goes---------I do think I better quilt the watermelon seeds first though so I can put the quilt show entry deal behind me.  FWIS waited this long so what is another day.... or 5?  Grab the bags and go---and take them to Jane's or Betsy's next week or however they want to handle it.  I am going for set up but that might fit into the chair's plans.

The other change over the usual routine with the Gadsden show is that the quilts have to be turned in on the 10th about 11 days prior to the event.  Even  hanging sleeves are required, people still don't get the message.  It takes too much time to get the temporary ones pinned on when the guys are up on the ladders waiting for the quilts.  Jane said they were going to address the "sleeveless ones" at their meeting on the 11th and eliminate the last minute scrambling.  Still, it would be helpful if the quilters would bother to follow the directions.  Even more,  the chair person could stuck to his guns about "hanging (the ones) without sleeves at the show chair person's discretion".   I am afraid I would be a hard a** about it and say "no sleeve, no hang" but that is only because I have been one of the volunteers having to break my back bent over the table doing what they should have done in the first place!!   Did I say that I don't even belong to this guild but go to help them as they have a bunch of elderly members that physically can't help??

Auburn starts off its football season at 6 tonight on ESPN and Alabama plays Michigan at 7 on the ABC affiliate.   I had to laugh yesterday when I was in Walmart after ink cartridges.  Hard to print up hand outs and quilt show entry forms without that!  Right across from electronics they had a huge display of Alabama t-shirts and other items.  I said aloud "hey where is the Auburn stuff?"  thinking equal representation, right?  Lady going by with her cart dressed in black and it turns out red and white too says "they must have tossed it out".  Guy with her has a U of A cap on and grinned when she said that.  Never did see the AU stuff.   Actually DJ and I tend to cheer on both teams till they have to play each other.  We are not from here originally so we didn't have to declare allegiance at birth, LOL.  Truthfully, I do happen to have Alabama championship 2011 checks but that is more because they were cheaper than the others when I changed my account.

And for those wondering how we fared in my area--Isaac went so far to the west that we only got a 3/4 inch of rain at our house.  While overcast for days, no further rain.  It is back to being more humid than it had been----ugh!  I guess by now he is spreading joy up in the Midwest.

Well there is no shortage of things I should/would/could be doing---see what shakes out and what can be crossed off my list.  I hope you all have a safe holiday weekend.