I tell you, I have some FAB-ulous friends, local ones and long distant ones. Truly a blessing to me in more ways than you will ever know. 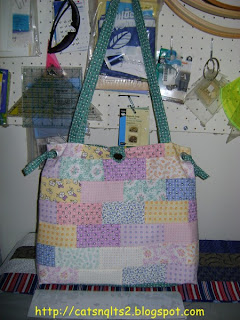 This year we 5 FAB friends are taking turns celebrating our birthdays with one another in a virtual format. Probably the hardest part is gathering 5 busy women in one spot long enough. Since we also planned to sew, Saturday was best. But first I got to open those presents that had been arriving at my house all week. Wanna see what these talented pals made for me? These did not post in the order that I opened them but that's okay, I guess.

Here we have a bag made by Pam out of my (our) beloved 30's prints. The pattern is in a past issue of "Quilts and More". I know this because I had plans to make one and have the magazine. I had admired one that she made one before---she called it a diaper bag, LOL. This is the back side. Tons of interior pockets in there! 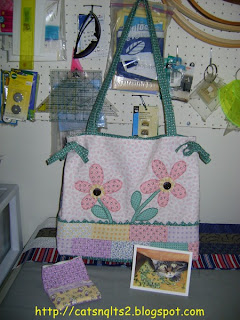 Pam suggested that I put something in the bottom to stiffen it up a bit. I have just the thing----a piece of acrylic she had cut for us some time back for another purse project. It is the perfect width. It is cut about a half inch short but once a slip cover is made for it, it will be fine! I have some of the Connecting Threads "Mama's Cotton" yardage so I can probably even match the flavor of the purse.

And look at this cutie front! Itty bitty prairie points, dimensional yo-yo's and cool buttons! She made a matching wonder wallet as well.

Cher sent the cute kitty card with some "seed money" for a trip back to the PNW. Sister's maybe and/or we all go up to BC to see our pal Norma?? Life happenings got in the way of a homemade gift and time ran out but she sent something for me to open anyway. What a sweetie! 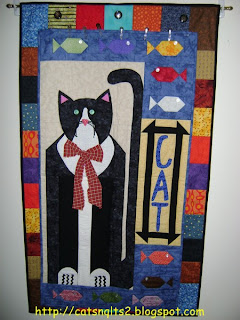 Look what Pat made for me! She had told me earlier this summer that she was considering making me a button-up wall hanging to go with the ones I am making and asked which ones I liked. I forget what I said other than maybe August's and I liked the "My Cat" one. Source: Joined at the Hip and then scroll down to BU #25. I love that she personalized it to make the cat look like my tuxedo kitty Skyler. The groups of 5 fish is significant too along with some of the fabrics.

You might be wondering "what's with those clips at the top?" I had suggested if she made a button up to just leave the top edge open and let me put in the loops so they would match up with my button placement. I just pinned it on the base so I could see how it was going to look. 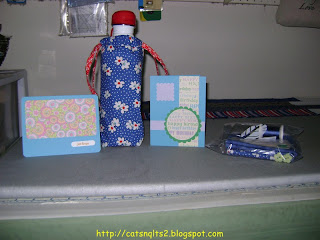 That explains the little bag of goodies in this next shot. Unfortunately I didn't see the note to open it last of the three wrapped packages but it all made sense once I did what I was told. Open the long skinny one instead, LOL

Pat sent the yardage to make the loops for the Skyler hanging as she was not sure if I preferred them to be turned loops or how you do purse straps. I got the leftover thread and buttons along with the leftover cutie blue 30's print that she made to cover the thermos bottle she sent. Going green with a thermos bottle instead of more plastic for the landfill. Notice the lovely hand made cards as well. 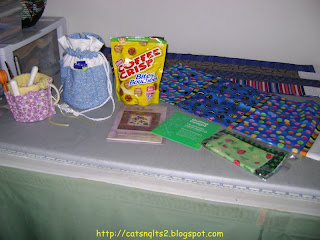 And here are my goodies from Norma! She made me a mug pinafore to organize the sewing tools---from 30's prints. Designed by a Canadian designer and I think she said a pattern distributed at a shop hop.

Next to it, you see a mug carrier, also in 30's blue. Again, a "go-green" idea for quilt guild meetings where you use your own mugs instead of plastic or stryofoam cups. There are pockets all around it too so I put some single serving drink mix packets in there along with stirring spoon, a packet of gum. Norma said she also sticks her guild name tag in hers so she is never without it at the meeting. Good idea! She found the pattern in a Australian quilting magazine.

The other goodies----yummo, coffee crisp bites. Love 'em and as far as I know you cannot get them in the States. The birthday card also contains a violet applique wall hanging pattern. She sent me a few novelties for my long term "I-Spy" project along with a Quiltmaker CD with some quilting patterns. The yardage has three kinds of candy on it---jelly beans, dots and another Canadian favorite candy Allsorts. Basically it is black licorice with other flavors added to it-----that I can find at one of the local Rite Aids, surprisingly.

From there we moved on to the sewing portion of the party. . Pam was also working in a patriotic theme for hers alternating red and blue strips---her top is completely done as of last evening and I saw the picture of it. Norma was working in a fall theme and has told me she is close to done. Pop on over to her spot and she may have it posted. Cher was working with yellow strips we sent her for her granddaughter's "yellow quilt " but making it more her quilt than the pattern shown. Pat had tried the pattern once and didn't care for it so I told her she didn't have to make one like this. She re-purposed her strips into an Amish Stripe instead. She shows her starts of the blocks on her blog a couple posts back---see link above.

Pictured of course is mine. At that point I had all but the last 8 strips at last joined in pairs and laid out on the bed. I have since finished up the pairs and some of them are joined---"twosies to foursies". The lower 1/3 of the quilt is sitting on my pressing/cutting table. It shouldn't take too long to finish up as those seams only took me about 30 minutes including pressing.

We have some lightning rolling in so I may need to wait to power up the machine. First rain we have had around here for a while. Unfortunately DJ was doing a little raking out in the spare lot while there was some cloud cover and burning the stuff on the burn pile----yard waste, the old mail box post, the boards DJ just removed from the shrub area out front that we want to re-do. I think he got a little wet on the way back to the house.

And sew it goes around here-----thanks for stopping by!

View my complete profile
Thanks for stopping by----
Visit Linda's profile on Pinterest.